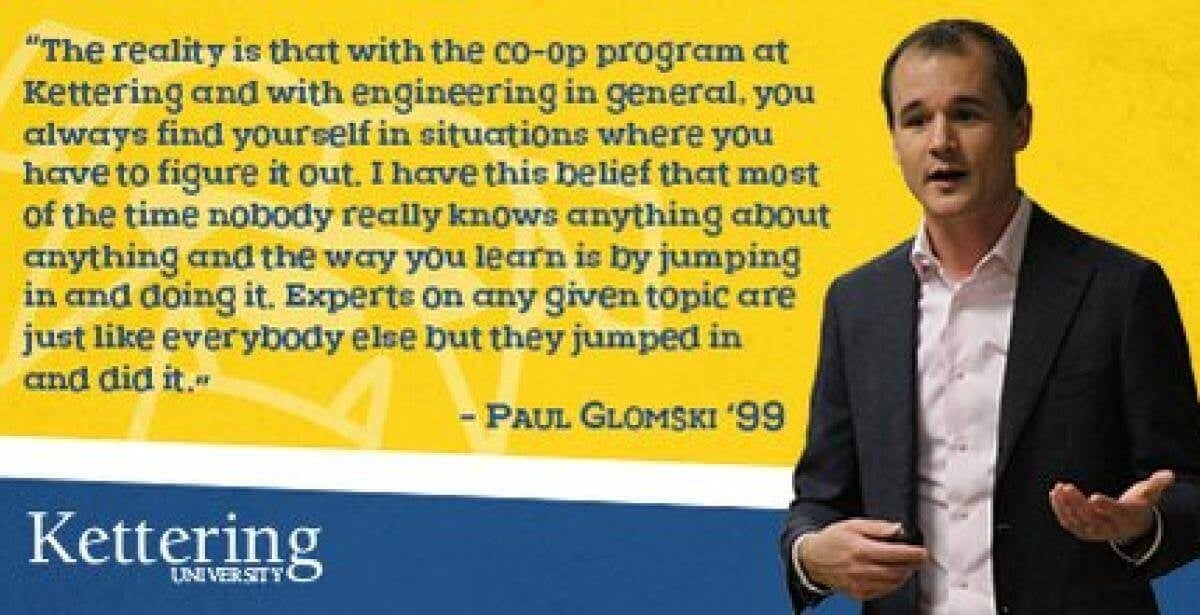 Detroit was hit hard during the economic crisis. The city’s debt was high, as was unemployment. Today, the Motor City is on an upswing thanks, in part, to a rapidly emerging tech startup scene.

Paul Glomski, Kettering University graduate, is one such Detroit technology entrepreneur. His business, Detroit Labs, specialized in mobile strategy and mobile app development and design. Detroit Labs also provides an important software creation training resource to budding programmers in Detroit. During their participation in the program, programming apprentices receive a full-time salary. They also have the opportunity to work for Detroit Labs, or a partner company, upon program completion.

Glomski and Detroit Labs’ co-founders, Nathan Hughes and Dan Ward, were recently selected to the 2015 Techweek100 for Detroit.

"At Detroit Labs, we specialize in creating beautiful, intuitive apps, but at the core of our business are people who are innovative, provoke new thought and lead civic growth," said Glomski. "Being named to the list of top tech influencers in Detroit is an incredible honor, and we are privileged to be sharing this with a distinguished list of professionals."

Glomski grew up about a mile down the road from the Kettering University campus in Flint, Michigan. After graduating from Fenton High School, he enrolled in Kettering’s Electrical Engineering program and completed a co-op at Delphi Delco Electronics, where he learned a valuable lesson that has since guided his major business decisions.

Glomski’s keystone lesson was inherited from his mentor, a machine repair tradesman, on the shop floor in the mid-1990s. Glomski was pulled aside to observe the workers on the assembly line and was warned by his mentor not to confuse the simple tasks that they were doing with their intelligence level. Rather, Glomski’s mentor asked that each worker be respected for his/her decades of experience and commitment.

"View people based on their potential and intelligence." – Paul Glomski

After graduating from Kettering University in 1999, Glomski continued at Delco for a couple of years before being hired by Deloitte to work as a consultant. While at Deloitte, Glomski recognized that continuing his education would be valuable to his career. Glomski enrolled in a joint Master’s in Business Administration and Mechanical Engineering program at MIT. From MIT, Glomski made a decision to move back to Detroit to start the Ford Motor Company executive development program.

Prior to launching Detroit Labs, Glomski was president of Therapy Staff, a health care services company. During Glomski’s time at Therapy Staff, the company tripled and expanded to produce upward of $15 million per year. At this point, the company sought to sell, and Glomski learned to lead the charge. Soon he was negotiating with private equity firms. Glomski likens that to his experience at Kettering’s co-op: "You always find yourself in situations where you just have to figure it out."

A Return to Kettering University

When Glomski toured the M@dison Block with Kettering University President Dr. Robert McMahan, he became enamored with the revitalization efforts of Flint as well as Detroit. After being impressed by McMahan’s vision and new campus master plan, Glomski agreed to join the newly formed Board of Visitors at Kettering and made his first trip back to campus in 15 years. "I came back to campus and was blown away," Glomski said. "I can’t believe there is an Einstein’s where the party store was, and I saw the master plan for what the potential is for the campus. It looks like there’s a bright future, and I’m happy to do my part in any way that I can."